Wakeboarding is the snowboarding of the water world, the “cool” version of water skiing made up of totally rad, colourful curved boards and funky shorts. You’re probably now imagining yourself as a 16 year old dude skimming along the Tahitian ocean, but the actual truth is you’re going to look a bit of a wally.You’re going to be in a full length wetsuit and most likely floating face first in the English Channel on a chilly Saturday morning after a messy Friday night. It’s going to be a painful session that’ll leave you moaning and groaning, but in our wakeboarding for dummies blog we’ll have you up and skimming the water in no time whatsoever!

First thing’s first, are you a goofy or regular rider? Or in dummy terms what foot is in front? Everyone has a different test to determine what foot forward you wakeboard but my top favourites 2 are as follows:

Find a recently polished hallway, slip off your shoes, pull on your socks and charge at it! When you’re skidding note which foot is in front, if it’s your right then you’re a goofy rider, if it’s left then you’re a regular! (Try to remember this vocab as it automatically puts you into the cool minority of your group)

Close your eyes and get a friend that’s not too keen on you to give you a shove in the back. Hopefully you’ll stick a leg out in front and whichever one it is is the one you want to lead with!

Once you’re strapped up and have plopped into the water you’re going to be told to sit and float as if you’re on a rowing machine, bum under the water and the handle between your legs. As the cable tightens you’re going to want to rush in and stand up but you’ll just sink and fall straight on your front as you haven’t gathered enough momentum yet. Instead, keep your bum as low as close to the water as you can, facing the cable, for as long as you can, and then slowly pick yourself up when you’ve gathered enough speed. Keep your chest puffed out, chin up and legs bent. As you stand you’ll be pulled horizontally to the cable and voila you’re wakeboarding! Just remember to keep more weight on your back foot, the second the front of your board dips under, the board will flip and you’ll feel a rush of pain across your face, but hey, no pain, no gain, right? 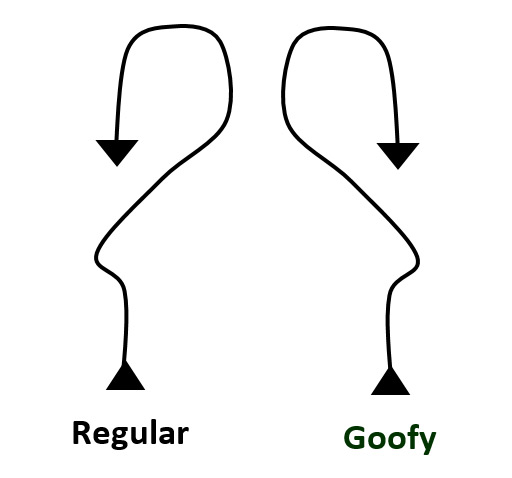 Once you’ve mastered standing up and going in a straight line you’re going to be faced with a corner. Scary right? For starters, you’re going to want to go in the direction your heel is facing. Lean back onto your heels, lift up your tiptoes and dip your buttocks back towards the ground and put all of your weight to your back (perhaps try this complex manoeuvre on land beforehand). When you’re approaching the cable lean slightly on your tiptoes so you’ll be on the opposite side of the line and then lean hard on your heel, this will build enough momentum to drag you around the corner and enough time for the line to tighten and pull you along again. You want to be aiming for a nice wide semi-circle and then finishing up in the middle of the cable once more. See the image to the right for the path you should aim to create.

Intrigued and want to try wakeboarding yourself? Call our team on 01273 858206 or book online, and we can help get you set for a day on the water!

What To Do on a Stag Night In

Which Stag Are You?

Who To Invite On Your Hen Do